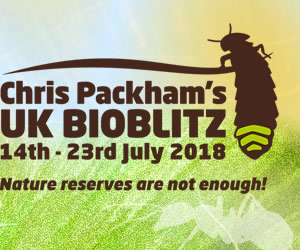 During the Bioblitz we had naturalists busy at 50 sites, we had the support of 13 Local Records Centres, and over 780 naturalists.  We recorded 4828 species.  Part of our success was extremely good luck with the weather, apart from one very damp day in North Wales in one of the hottest summers on record for the UK.

We recorded new spiders for Scotland, found by Chris Cathrine, entomologist: “Nigma puella as this would be the first record for Scotland as well as for Flanders Moss.  It remains unconfirmed until I have been able to check it against a reference specimen [which it was confirmed as 2 weeks later].  This is a Nationally Scarce species.”  It’s unusual habitat in a UK context, but matches where it’s found in Ireland.

New species continued as we progressed, with  new Fungi for Northern Ireland then Caerlaverock turning up the first Saucer Bug (a pretty aquatic insect) for Scotland – maybe a sign of a changing climate.

We looked at standard farmland, where Cambridgeshire naturalists investigated the farm land and subsidiary habitats, finding the second site in the county for another aquatic bug Aquarius paludum, and the farmland had 329 species in total. Biodiversity CAN exist with viable arable farming.

We had moth traps run at 45 sites, which provided the chance to see what range of moths is on the wing in high summer across the UK, including the largest single-site night moth-trapping ever achieved in Yorkshire, with 214 species at Nosterfield LNR.

The top two sites were both restored Extractive-industry local reserves.  Kings Dyke (brick pits) on the edge of Peterborough really pulled out the stops and managed to come in top with 1139 species recorded, due I am sure in no small part to being on the doorstep of Pete Kirby, a very skilled entomologist, who spent much of the 24 hours there finding as much as possible.  They were run a close second by Nosterfield Quarry LNR in North Yorkshire, where 1111 species were recorded.

My own personal wildlife highlight involves stoats.  Day 5, first site St Abbs head (National Trust for Scotland).  I had been round to see many of the recorders and naturalists at various parts of the site, and walking back towards our base, where we all enjoyed watching Minke Whales (The biggest animal we recorded) out to sea, I noticed a rather odd-looking rabbit hurtling across the grassy headland.  Lifting my binoculars for a closer view, I realised the ‘oddness’ was actually a stoat attached to the back of the rabbit….but the unimpressed rabbit was running speedily to try and escape.  They disappeared out of view so I don’t know what happened.  However, 50m further along the path, I was aware of an odd noise from the grass by my feet and looking down noticed a huddle of small mammals.  They were baby stoats clearly waiting for mum to bring some dinner.

Some of our sites were very well recorded NNRs, but there are still things to discover at such sites, eg Wicken Fen and Weeting Heath.

Weeting heath (Norfolk WT) had a few exciting finds and some of their recorders provide fascinating lifestyle snippets of the amazing insects on the reserve.

“Nick Owens, county bee recorder, Mark Welch, a dipterist, and his son Luke did a fantastic job of recording the Hymenoptera and Diptera. They found some excellent species on the day including the nationally scarce Oxybelus argentatus; a wasp which provisions the larvae in its burrow by bringing in Therevid flies impaled on its sting. Nick and Mark fascinated us all with the incredible relationship between our resident Pantaloon Bees Dasypoda hirtipes and their ‘Satellite’ fly Miltogramma germari. The Pantaloon Bee provisions its larvae with pollen in its individual burrow, but its brood parasite follows the bee everywhere (like a satellite in orbit), waiting for it to reveal the location of its burrow. Once the bee heads into its burrow the fly waits patiently until the bee emerges before nipping in to deposit its own larvae which consume the bee larvae along with the pollen provisions.”

The hot summer was possibly a barrier to us recording many fungi on the trip, but again Weeting struck gold, due to a very ingenious county recorder “with the ongoing drought things looked a little bleak for turning up interesting Fungi records but Mycologist Dr Tony Leech had a cunning ‘Plan B’ for such an event. Several weeks before we had collected some dung from the heath that Tony had been kindly incubating in his airing cupboard to investigate what croprophilic fungi  occurs at Weeting on the day. Tony puts it best with ‘We may not have had quantity but we did have quality – two new Norfolk records’. Both Ascobolus crenulatus and Sporormiella lageniformis growing on Rabbit dung were new for the county – not a bad result for the hottest summer on record since ’76.   “

Species recorded per day (as at Aug 10th )

Back to main Bioblitz page