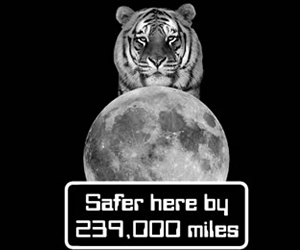 ‘Targeted for Extinction’ is a t-shirt design created by Chris especially for Birdfair 2017. It’s free to download so you can take it to your chosen printers and have made up in the size of your choice.

Killing Wildlife for Fun is a Dying Business – T-Shirt Design

For Cecil, Annie, Chance . . . and all the other millions of wasted lives. Free to download and print in the colour and size of your choice.

100 Things That Caught My Eye

A rare glimpse into the imagination of an exceptional photographer at the moment he captures each picture. A stunning collection of his photographs from more than 25 years of travelling.

Such a simple idea – getting people walking together and raising money for their favourite wildlife charity at the same time. I hope everyone gets involved and makes this a huge success.

When he stole a young kestrel from its nest, he was about to embark on a friendship that would teach him what it meant to love, and that would change him forever.

The Truth – our Harriers are Dead

The petition to ban driven grouse shooting has reached 100K. By means of a little celebration this free t-shirt design is yours to download and print on this special day.

Fingers in the Sparkle Jar: A Memoir – Hardback

In his rich, lyrical and emotionally exposing memoir, Chris brings to life his childhood in the 70s. Pervading his story is the search for freedom and meaning in a world that didn’t understand him.

Listed in Blog, Chris Packham's Books, News, Off the Shelf

Chris’s beautiful, fact-filled picture book is a perfect introduction to the natural world for all young nature lovers. Stunningly illustrated by Harry Potter cover artist Jason Cockroft and out on 28th January.

Charming stories and animations to open young minds to the treasures of wildlife and the natural world. Pip DVD’s, books and toys created to be every child’s favourite nature companion.

Chris’s last year’s classic t’shirt design ‘Never Mind the Bollocks’ – download for free and take to your chosen printers to have made up in the colour and size of your choice.