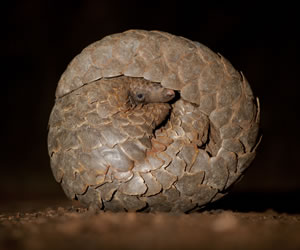 As a child it was the weird creatures which really captured my imagination. Lions, Leopards, Elephants and Rhinos were obviously cool but didn’t muster the credibility of Giant Anteaters, Armadillos and most awesome of all . . . the Pangolin. A mammal with scales, a mammal which rolls into an impregnable ball! I remember an old black and white clip of Sir Dave or Peter Scott or Durrell or Desmond Morris rolling a balled Pangolin back and forth across a table. Not very pc by today’s standards but for the young Chris it was pure animal magic.

So on my lifetime list of things I’d really, really like to see the Pangolin was in pole position. A zoo encounter for the UK bound child was never on the cards as these highly specialised animals have rarely prospered in captivity and of course I never dared dream that I’d ever get a chance to visit their home ranges. But I have and how I have hankered after them.

After a few years of travel I had caught my own Armadillo and watched Porcupines at night, cuddled an Elephant shrew and been enthralled by a burrowing Echidna . . . but no Pangolin. After twenty five years of exploration and plenty of time in the Pangolin zone still no scaly action . . . I’d had the sniff, been to the infamous ‘muti’ market in Johannesburg where all sorts of animals are traded in the name of traditional medicine and here I’d seen plenty of detached scales lying sadly on the pavement. I picked one up and marvelled at it, thought of buying it as a souvenir but abstained as any such purchase would in effect be promoting the evil trade.

My closest near encounter came on a freezing early morning after a long unproductive night of un-filming with my friend Micheala Strachen. We had given up and set off back to the lodge somewhere in South Africa, she in the vehicle in front, myself and the crew huddled under blankets in the second Landy. The car in front stopped, we stopped . . . why? No explanation came, no call on the radio, just a frustrating hiatus while we waited shivering and cursing. Then we were off and whilst unpacking back at base I asked what the stop had been about, ‘Oh, we found a pangolin in the road’. A real test of friendship that was!

And so it went on, more and more time in suitable habitat and constant requests to every guide I met – ‘. . . any chance of a pangolin’, ‘. . . a pangolin would be nice’, ‘. . . my mammal grail would be the Pangolin’. Thus when I returned recently to AfriCat inNamibiaI casually mentioned to my great buddy Tristan Boehme that I’d still not caught up with my all time most wanted animal. They were around he confided, but difficult, he had seen one or two in fifteen years and visitors to the excellent Okonjima Lodge saw them around once in three years on average. Maybe. However, he happened to mention my craving to Wayne Hanssen, AfriCats founder, and he in turn put out a Pangolin APB to all staff, guides, rangers, security, even the cooks and cleaners – if anyone even smelled a Pangolin they must give Tristan a shout.

… in the middle of a dusty track

We were just waiting for our dessert course two nights later when we were scrambled from the table and flew into the Land Rover. With Tristan at the wheel we sped into the cool night air, slowing for loads of Nightjars, Great Horned Owls and a few bemused Oryx. The report had come from the far side of the property, at least a 20km drive away and sat bouncing in the back I was thinking that it was bound to have shuffled off into the night by the time we arrived despite our driver’s careful but urgent trajectory! It seemed to take forever, and ever, but eventually we arrived. Two security guards were stood either side of a dusty track and in the middle of it was a large brown ball, a PANGOLIN!

In truth I hardly remember the first five minutes. Apparently I was saying ‘yes’ repeatedly and smiling insanely whist peering, smelling and then cuddling the embarrassed animal. It was huge, so much larger than I’d ever imagined an African Ground Pangolin would be. It was so utterly brilliant. Its scaly surface etched with a patina of a tough life lived, worn, gnarled, scratched and chipped scales. But still effective as an armour as there was no chance of a peep at its deeply hidden head, the extremely broad tail wound tightly over the inward stretched limbs, it flinched a little but was otherwise still and silent. After a rash of trophy snaps I finally calmed down and got my proper camera out, placed the Pangolin in the middle of the road, de-grassed a few irritating stems, lit it with a torch in a pool of soft light and lay down alongside the vehicle. Everyone was quiet as we waited for this wonderful creature to unfurl. And we waited, and waited. Then by deviously shifting its centre of gravity without opening at all it twisted away making a mechanical gravelly crunching sound. It repeated this manoeuvre several times over about five minutes before suddenly unwinding and making a surprisingly rapid bid for the shadowy bush. I leapt up and retrieved my reluctant star and we agreed to give one more go and then let him go. So I settled down again and whilst crickets chirruped and a distant Hyena wailed I waited. Then, so, so slowly the fossilised ball cracked open and a tiny wet eye glistened in the beam, then a nose, twitching as I held my breath undecided as to press the shutter now or wait to see if he would show me a little more of his soft interior. I fired – better to have something rather than nothing, always grab a banker, never trust the future. And here is my Pangolin portrait, the one and only picture I got, and he’s peeping! 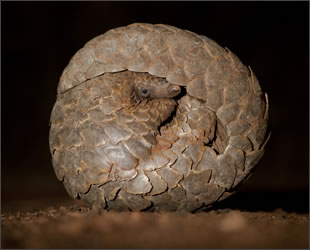 I got up, dusted myself off, and placed the Pangolin in the grass beneath a bush. We waited for it to slope off and then drove off in a state of bewildered elation. A fifty year fantasy had been fulfilled, it seemed like a bizarre dream, unreal, surreal. It was gone midnight when we got back to the lodge and I fell into a deep dreamless sleep. When I awoke I had the faint whiff of a wonderful thing on my hands.

But then things became very odd. The very next day a second Pangolin was found in broad daylight and videoed going about its ant eating business in a rocky gully. It was watched for twenty minutes! Finally on our last morning as I was packing around eight o’clock in the morning one of the guides drove up to the lodge saying that another Pangolin had been found. We set off and sure enough there it was, smaller, shyer but no less battered by its shorter life amongst the boulders. This time I made a short video, the light was awful for still photography, and here it is. Sorry the top of my head is missing – an artefact of tired self-shooting and a preoccupation with not stressing the animal – I wanted to get it out of the sun as soon as possible. So I quickly placed it under a low Acacia and set off home. Like buses Pangolins, none for a lifetime and then two come along at once. Bloody marvellous!