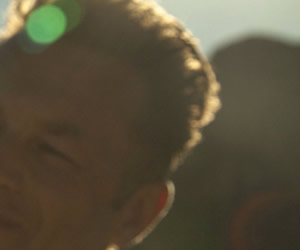 A massive wall of dust rises up in the distance. And on a deserted track a 1950’s Cadillac appears. Wearing a sharp black suit and shades the driver is revealed. Chris Packham.

Not what you’d expect

In episode 1 Chris investigates why birds are exploding in the skies above Nevada, he reveals how you extract spider silks from goats and delves into the bizarre world of ‘Worm Grunting’. He discovers how nature makes Stradavari violins sound so good and how to make bulletproof skin from spider silk. There are more weird and fascinating findings including the very strange blob like creature that was discovered in a sewer. And could a monkey give CPR?

Images on this page are used with permission:
Chris Packham with the Cadillac is copyright of Andy Hawley.
All other images are copyright of the BBC.