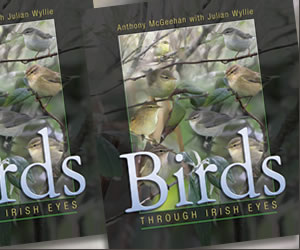 By Anthony McGeehan and Julian Wyllie

I first met Anthony when he was running the RSPB’s Belfast Lough reserve just behind the George Best International Airport, Belfast. Lough had once been an amazing place for birds but decades of industrial use and reclamation had all but destroyed it.  The reserve, on reclaimed land, a little square between industrial units and office complexes is all that’s left for birds now and thus they flock to it.

It was for me one of the best reserves I’ve ever been to and its hide/visitor centre was probably the best in the UK. It was a picture window onto the most skilfully designed and managed bit of land ever and knelt with my nose pressed to the glass I saw the rictal bristles of Black-tailed Godwits. With my naked eyes! No binoculars or scope were needed, these beautiful waders were just centimetres away and very happy too, preening, roosting. And it wasn’t just Godwits, the list here was astonishing, and they weren’t all ‘fly-by’s’.

Due to Anthony’s amazing vision and his exceptional skill in shaping and managing the reserve it supported fabulous numbers of species. I remember creeping out to one of the hides in winter and looking out to see tens of Snipe all around, so close, so neat, crouching in the frosty fronds of sedges.

On another occasion Anthony joined us on a trip to Lough Neagh to look for Whooper Swans. It was damn cold and we were having a tough but successful day. We snuck up on an otter as well as the swans and were getting some great shots. In the end there was a great chance of a sunset over a large flash of water covered with a thin sheet of ice . . . but there was a problem. Right in the middle was a bright blue plastic fertilizer sack. We were stood there moaning about it for a while when we noticed that Anthony had snuck off and was wading barefoot, trousers rolled up, through the freezing water to remove the bag. And this sums him up – he is a do-er, not a talker. He has an idea and he makes a difference. He is one of my greatest conservation heroes. Top bloke.

Now I don’t know Julian, but his biog’ says that he lives in West Corkand, that when he isn’t birding he’s listening to The Fall. There is therefore more than a good chance that he is a top bloke too! And certainly if this book is anything to go by.

A new way of seeing

Firstly, do not be put off by the ‘Irish Eyes’, they are very keen and very sharp. Yes, there is an Irish perspective and it runs all through the introductory chapters and each of the species accounts but the issues and concerns are universal and the authors clarity and honesty is very refreshing. They point their fingers and necessarily say ‘what’s, what’ when it comes to contemporary conservation. But it is not a book about conservation, it’s a book about a new way of seeing, regarding, understanding and enjoying birds.

They use behavioural gems, ecology, physiology, history, folklore and personal anecdotes to enliven their descriptions of every single species. I guarantee that you will learn masses from this book, lots of remarkable gems that will increase your appreciation of bird life. For example, Mistle Thrushes grab all the attention by singing during rain, sometimes heavy, a time when all the other species have shut up and hidden away. This gave rise to their local name – ‘Storm Cock’.

Brent Geese leave Strangford Lough and travel to within ten degrees of the arctic to breed. Ten degrees! Mute swans need 50 metres of clear water to take off.

There’s superb history here too, a story of how a lost Great Auk was fed on potatoes in 1834 after being captured off Waterford. Unsurprisingly it died but its mounted skin survives as one of very few in a Dublin museum. Tales of kids catching Treecreepers in hats, caged Skylarks being coaxed into song by being given sods of fresh grass and attempts by a soldier returned from the Napoleonic Wars to control ravenous House Sparrows which were decimating grain in County Down all add a rich charm and act as a foil to the spattering of hard truths about dramatic and occasionally terminal declines.

The photos are worthy of note too. Many are very good, a real cut above the normal dull and illustrative fare that publishers get from picture libraries and in keeping with the books determination to do things in a new and innovative way some are photo-montages that show a species various ages, sexes and ranges of plumages all on the same page. Nice paper and a good size.

There are sections on choosing and using binoculars and telescopes, making your garden bird friendly, migration, moulting and tips on identification – sound and vision. Each author writes with ease, eloquence and enthusiasm and it ends with each describing an influential days birding. These have a real romance which set the end with a flourish of pure passion.