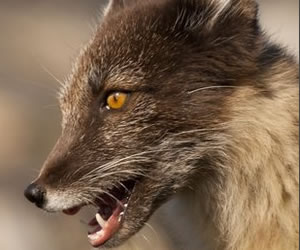 Chris Packham:
“Operation Iceberg” is a five-week mission for our team of scientists and filmmakers to document the life-cycle of arctic icebergs from their birth to death, hoping to reveal their secrets in a BBC/Discovery Channel co-production. This is the third of my BBC Nature diaries, detailing my experience of sharing our temporary home with arctic foxes.

At least two arctic foxes visited our camp but one, identified by a clear white spot at the base of its wildly coiffed tail became a regular. He typically arrived “overnight” in the hour or so before everyone got up.

Yes, despite the 24 hours of uninterrupted sunshine we enjoyed and endured, the fox was definitely still a ‘nocturnal’ animal. Maybe even he was trying to avoid the blood-crazed masses of mosquitoes.

I’m calling him he simply because of his tireless habit of scent-marking everything that took his fancy, mainly the waste pit area where we would bury all of our organic rubbish. That is, if he didn’t meticulously pick it out first, to re-bury it on the slopes above the fjord.

In and out he would delve, each time appearing above the turf with another treat: egg shells to lick clean, tart lemon halves were clearly irresistible and, on nights when the pasta portion was over-estimated, a feast. In ice-blasting winds he will scour the scree for his caches in the dark months of winter.

Of course, I kept a secret supply of food under the flysheet of my tent to feed him each morning. But he was impatient and came sniffing round whilst we slept. He duly marked the outside of the tent.

I liked that. The musty odour was pleasantly reminiscent of that perfume that greets me at my gate at home most mornings.

At this time of year arctic foxes are in summer pelage, not the bright white or blue grey they are in winter, when they will cautiously trail polar bears to scavenge leftovers from their seal kills.

It is a cat and mouse game that sometimes means the bears get a bonus meal of fox.

But these creatures are every bit as cunning as their UK counterparts. They can kill many ringed seal pups themselves by digging into the birthing burrows beneath the snow.

The foxes are also superbly adapted to the Arctic, their fur is extremely thick and this enables them to maintain a body temperature of 40C when the air is at minus 60C. They have small ears and noses with short legs to reduce the areas of heat loss.

Our liaisons were a real highlight for me, I felt good about the way we had provided a resource to make life a little better for him for a couple of weeks. Through our modest excess we put something back into his part of the natural community here.

But not everyone felt as benign. The words “vermin”, “pest” and fears that my little friend would “raid the supplies” and “chew all the cables” were common.

It struck me as strange how some could so easily transport intolerance far from home and how deeply our mistrust of foxes is entrenched.

I just smiled, sniffed the air, shared my meals and enjoyed a brief encounter with a perfect stranger.