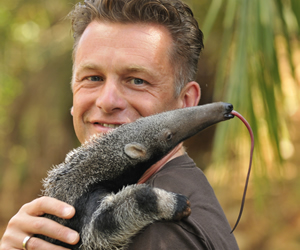 ‘Secrets of our Living Planet’

In this series, naturalist Chris Packham reveals the natural world in a way that you’ve never seen it before. For him, what is really beautiful about nature is not the amazing animals and plants that we share the planet with but the hidden relationships between them. These relationships may sound bizarre but without them, no life would be possible.

Chris reveals:
Why a crab in the swamps of Bangladesh needs a tiger
Why the mighty Brazil nut tree needs a rare orchid and a small rodent
Why a small gecko in Kenya needs a giraffe
Why the North American lynx needs a tiny moth caterpillar

In this, his first truly global series, Chris will travel to some of the planet’s most awe-inspiring ecosystems, in order to reveal the real beauty of nature.

Chris travels around the emerald band that encircles our planet – the jungles. And he begins by tackling one of the biggest puzzles about the world’s rainforests: why do these places have such a bewildering variety of life, far greater than any other habitat on Earth? His quest begins in Panama where more varieties of birds have been recorded in a single day than anywhere else on the planet.

He reveals that the key to the biodiversity of the rainforests is an almost constant climate. This allows insects and everything else that gorges itself on plants, to flourish all year round. So rainforest plants are under constant attack. The result is an unrelenting arms race, in which only the weird survive. Plants with barbs and poisons for defence; mammals, like the three-toed sloth which has evolved a way to digest leaves that nothing else can digest – even if it means taking days to digest them and moving as slow as, well, as a sloth. And then there are the Heliconius butterflies, that have evolved defence mechanisms against the cyanide of poisonous vines – absorbing the poisons into their bodies to use as a defence against their own predators. Chris reveals how evolutionary arms races in jungles have led to a riotous biodiversity of life.

Chris travels to Borneo to see how some of the largest animals of the jungle, the orang-utan and the forest elephant are crucial in protecting this biodiversity, by spreading the precious seeds of jungle plants, far from their parent plants, to avoid attack by their predators.

He then travels to the Amazon to witness one truly amazing web of relationships centred around the Brazil nut tree. The ecosystem of this tree is too complex for it to be cultivated, so if you’ve ever eaten a Brazil nut, you too, are dependent on its ecosystem. It involves a small rodent, called an agouti, which the tree needs to disperse and plant its nuts, and a rare orchid which attracts a rare male bee, which in turn attracts a female, the only creature capable of pollinating the very fussy Brazil nut flower.

2. The Secret of the Savannah

Chris travels to the savannah of Kenya, the grasslands of Australia and the Cerrado of Brazil to witness how one of our most important ecosystems work – grasslands. The secret of grasslands is not what they have, but what they don’t have – and how they cope. Grasslands are lacking in one crucial nutrient. Nitrogen is the element necessary for all proteins, the building blocks of life. You can’t grow without it, yet nitrogen-poor grasslands around the world support some of the world’s largest animals. Something that’s only possible, thanks to the ways that these ecosystems ‘manage’ their nitrogen.

Chris travels to Kenya to see the surprisingly important role that rhinos play in making the grasslands fit for antelope. In the Brazilian Cerrado, he sees how maned wolves get by on a low nitrogen diet by gardening their own fruit. And how anteaters hunt the world’s richest source of nitrogen… not ants, but termites. In Australia, Chris encounters a weird cast of mini grassland characters, such as bandicoots and quols, driven to the edge of extinction by the introduction of alien species. Foxes and domestic cats have removed much of Australia’s natural grassland fauna and, as a consequence, the whole ecosystem has suffered.

Finally, Chris returns to East Africa to reveal how one extraordinary ecosystem works – that of the acacia tree. A gecko, a giraffe, an ant and a monkey all depend on this tree for their survival … but what’s really wonderful is how these individuals and the acacia also depend on the actions of each other.

Seasonal forests, such as those that cover the UK and most of North America, are special. Their ecosystems have to cope with drastic change twice a year, in Spring and Autumn. Not only do the inhabitants have to deal with the change, but the entire ecosystem has to transform itself – and it has to do this in perfect synchronicity.

In this episode, Chris spends all of his time in the vast seasonal forests of North America. Here, he sees why the whole forest depends on the Autumnal activities of a flying squirrel. And uncovers how the activities of an obscure moth caterpillar in Spring can mean the survival of the Canadian lynx in winter. Perhaps most amazing of all though, is how the great forests of British Columbia depend upon bears to catch salmon and take them into the forest, where their carcasses then fertilise its massive trees. Amazingly, up to 85% of the nutrients that feed these trees come from salmon. That’s how much the tree needs the salmon.

Secrets of our Living Planet was a challenging series to make on many levels; travelling to all the locations in a short shooting season, grappling with all the world’s climatic extremes and actually meeting the animals tested the team’s practical skills, and temperaments, to extremes. But perhaps our most difficult quest was telling our story; concisely and comprehensibly explaining the remarkable complexity of nature, truly portraying its magnificence and its subtle nuances so that viewers can see Secrets of our Living Planet.

For me it has been a chance to tell the greatest story ever told. To romp through some of the most amazing sub-plots and lead the viewers toward an awesome epiphany, to really explain how nature works. I want them to go ‘Aww’, go ‘Wow’, I want them to shed tears at the sheer beauty of it all.

I’m a no nonsense pragmatic scientist. But I know that the fuel for such a psyche is a deeply felt emotional response to nature, it’s that which makes me set my alarm clock, shiver, sweat, weep and bleed to encounter the World’s wild things. For me, understanding our planet’s secrets will never dull an appreciation of its unparalleled beauty because how it works is the most beautiful thing of all.

From snowfields to shoals of sand, from jungles to grassy plains, from waterfalls to sparkling reefs, we travelled our planet in pursuit of a cast of species which were equally as diverse: flying squirrels and manta rays; orchid bees and kangaroos; termites and Rhinoceros. I met an orang-utan, a three-toed sloth, a giant anteater and a host of crabs and snails. I saw tigers and jaguars, climbed to tropical tree tops and snorkelled with turtles. Every destination and encounter had a purpose – to unravel a remarkable tale of incredible connections between these animals and their environments. Connections, without which, they and we, simply could not exist.