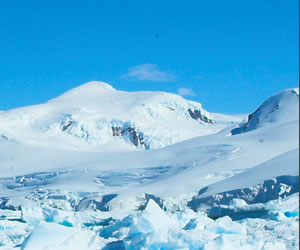 Perched on our promontory camp we are drawn to constantly gaze down upon Greenland’s Store Glacier. Our backsides have already worn the crispy black lichen from the boulders, the best seats in the house.

“Beautiful”, “magnificent” and “awesome” are words constantly carried on the breeze, which sweeps up the naked cliffs of the giant ice monster and does precious little to dissuade the millions of ravenous mosquitoes who have crashed our party.

But as I stand to leave my viewpoint, I’m almost as reluctant to turn my back on this thing as I would be a crouching tiger or stalking bear. For me, the word missing from the vocabulary of amazement is “menace”.

Landscapes are only infrequently more elemental than this.

At first glance it appears composed of no more than air, rock, ice and water. But more studied examination reveals that the ambition that life has to explore and conquer has been rewarded with a surprising array of successes.

The air is full of those mosquitoes and there are birds too, petrels and gulls drift like snow flurries across the massive face of the ice, flashing specks playing with the deep blue shadows of its towering cliffs and aggregating around the churning waters of the glacier’s melt water plume.

Here tonnes of milky fresh water drain nutrient rich sediments from beneath and within the ice and this instigates a highly productive ecosystem.

Algae exploit those nutrients, invertebrate animals graze the algae and vertebrates come to feast in turn.

The mass of northern fulmars and glaucous gulls enjoy the amphipods and ringed seals no doubt enjoy the capelin and halibut which are common enough to draw human fishermen to these dangerous waters.

On one occasion we spied about 150 ringed seals wrestling on the fluxing mass of ice debris that choked one of the bays in the great glacier’s front.

For us, it’s one of the most perilous places on the planet. But for a creature that has thick blubber and can slip beneath the ice with ease, a perfect place to sleep safe from marauding polar bears.

The rock too is far from unproductive.

Indeed our camp is spread over one of the most extraordinary forests I have ever seen.

And it is on, rather than in, the forest.

The treetops here are only 15cm tall at their highest point, composed as they are of dwarf forms of birch and at least two species of willow, both in flower with fluffy little pollen freckled catkins.

The diminutive birch leaves have the same top side colour and shine and underside patterning as those growing in the UK but the biggest I could find was only the size of a shirt button.

Mosses fill the damp hollows; and the lichens, those spheric combinations of algae and fungi, provide a rich pallet of greens, browns, pinks and oranges through every sedentary surface of rock and stone.

I photographed at least 15 species of flowering plant which include some very attractive saxifrages and wintergreens.

At least two of the flowers are definitely “designed” to be pollinated by animals with long tongues, as they have deep nectaries. I’m sure that for a few brief days of the summer there must be moths or butterflies active here.

What a thought. Butterflies side by side with glaciers, something so fragile and ephemeral flitting across the face of an entity which radiates unforgiving and belligerent cold.

However there is no doubt at all which animal has made the biggest impact on our expedition team… the dreaded mosquito!

For my part I really admire them and cannot even despise that individual that seizes the advantage of my own calls of nature to bite me in places where mosquitoes should never really reach.

I’ve killed none deliberately, I brush them off to do what they must – play a vital role in the natural community here.

And after all who can blame them for thinking that all their Christmases have come at once when 40 warm, blood-filled mammals rock up to sit and watch their glacier.

It pops, cracks and snaps, it clangs and rings as if it holds within its frozen heart giant bells. It rolls thunder between its tortured flanks and fires cannons in its deep crevasses, and angry jazz that jars our sleep and snatches our glances towards it’s monstrous vanity.

It radiates an irresistible terror, we must look and maybe it is this which finds us trying to appease with all our wonder as we stand entranced by its cruel and icy majesty.