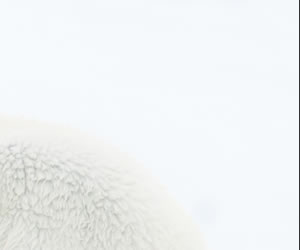 “Operation Iceberg” is a five-week mission for our team of scientists and filmmakers to document the life-cycle of Arctic icebergs from their birth to death, hoping to reveal their secrets in a BBC/Discovery Channel co-production. This is the final installment of my BBC Nature diaries, detailing my experience of encountering the Arctic’s most famous predator: the polar bear.

The iceberg looms. A long line of clean pastel blue ice that fades into a soft wet mist which wraps up and rolls over this strange island.

This end of our voyage has all the romance of Rider Haggard’s ‘Lost World’, we have come to a remote and inhospitable, hidden and ephemeral land which is slightly surreal and beyond the reach of man.

A place where our knowledge has uncomfortable limitations, where unexpected monsters can prowl out of the fog with terrifying consequences.

Twenty minutes ago, one did and I saw it with my own eyes, I even thought to photograph it.

The ivory hued mass which began as a mere binocular blob in the distance had stirred and become animal.

Slowly and surely its shape shifted from cosy cushion to robust predator, it rose gently without alarm and confidently and deliberately padded to the top of the jagged crest that hung above our ships bow.

Its huge head rolled from side to side and then tipped down, its coal black nose pointing, its dark dispassionate eyes staring straight at me across a gulf of just 15 metres of chill air.

But it was not that kiss of arctic vapour that sowed a shiver, it was the brutal honesty of its regard, its deep and ancient right to be dreaded, its complete and admirable ability to kill me with consummate ease and utterly no conscience.

I like that from an animal, I like to be reduced to a prey item, to be humbled, stripped of human arrogance, to be just flesh and blood, to be seen as no more than a meal. It’s a rare and sobering affirmation that we have not tamed all the wild in this world.

Polar Bears are the world’s largest land predators and every year they kill and eat people.

Thus I find myself in a minority on the Neptune where an epidemic of worry has spread now the iceberg is theirs and not ours.

For me it’s a fabulous and privileged opportunity to watch and learn more about these enigmatic creatures and I’m hoping that when our helicopter arrives we can conduct a full census of the ice and determine how many of what age and sex are summering here.

I have a mentor too, Doug Allen, who has spent months with polar bears. Already his knowledge and calm pragmatism have been an asset in developing our plans to work alongside these animals without conflict.

We have horns and flares and we have rifles but I will be disappointed if we ever need to point a gun at a bear. There are two unthinkable tragedies we must avoid: being killed or killing a bear.

I for one plan to use this chance to study one of our last great carnivores up close. But not too close.

I’m not frightened of any species of animal bar humans, but I respect them all and know that confidence during crisis is a key survival tool.

The real enemy is not the predator – it’s complacency. On the ice I will remain keen, will not walk without looking over my shoulder every thirty seconds, will study every dip and trough that may hide an animal whose business is hiding and consider critically and carefully the nuances of the bears’ behaviour.

With constant measured caution and fearless respect we should avoid any discord and I for one plan to use this chance to study one of our last great carnivores up close. But not too close.