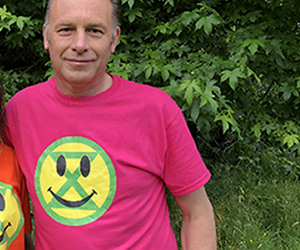 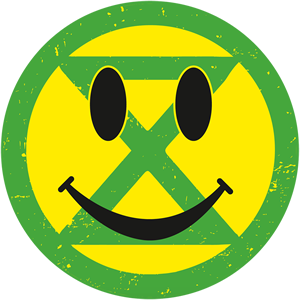 Download your free XR Smiley motif design, take to a t-shirt printers and use for your climate and environment activism . . . but please don’t be tempted to copy and sell this happy combination of iconic symbols.

To download – click motif image on left. It will open in a separate window as a PDF file. Download, save to your device and you can email or upload it to your chosen t-shirt printing company.

Why this design? Your planet & your species needs you!

According to the Smithsonian Institute the American graphic artist Harvey Ball drew the original simple smiling face with two black dots with a black arc to represent the eyes and mouth in 1963. He was the employee of an insurance company and his work was commissioned to cheer up the staff. He allegedly drafted it in ten minutes, feasible, and was paid just $45, unfortunate – given that it was reproduced on 50 million button badges and became familiar in every culture on the planet. In the UK the cheerful face became associated with psychedelic counter culture from the 1970’s and found popularity again with the acid house movement that emerged in the 1980’s.

The extinction symbol was drawn by an anonymous East London artist, ESP or Goldfrog ESP, to represent the very real threat of the sixth mass extinction precipitated by human activities. The environmental protest group Extinction Rebellion have agreed with ESP that they can use the symbol so long as it is not used for any commercial purposes. Gail Bradbrook, one of the groups founders said ‘Not only does Extinction Rebellion not support or endorse any corporations, it reminds them that the (symbol) may never be used for commercial purposes, including fundraising. The Extinction Symbol is loaned in good faith to XR by street artist ESP’. 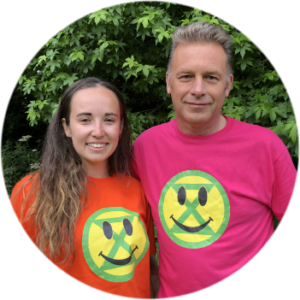 The fusion of the two seems appropriate because, despite the very serious concerns which have precipitated XR’s actions to draw urgent attention the severe dangers we face at this critical time in our species and the planets history, they have sought and essentially succeeded to demonstrate peacefully, passively and politely. This you will know if you have had the pleasure of attending any of their actions or events where the atmosphere has been akin to that of a festival.

If you haven’t yet been a part of this important movement then please try to join in soon – your planet, your species and every other species needs you!