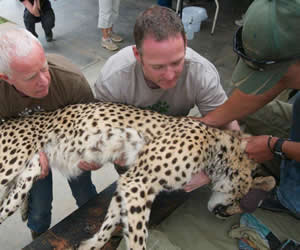 “I was so impressed by the work of AfriCat in Namibia that I invited them to write a guest article about the groundbreaking work of this charity.” Chris Packham

If someone was to pose the question, “what is the greatest threat to wildlife?” – most of us would probably answer; Man.

And in that answer most of us would probably be fairly close to the truth. But if man is the greatest threat to wild life, then what does the rural African consider as one his greatest threats in trying to carve out a life for himself in deepest Africa? Wildlife.

So, it’s a conflict zone with each defending his own territory and occasionally making forays into the other’s. Thus today the term, “problem animal” is out and “Human Wildlife Conflict” (HWC) is in.

Although many animals can be said to cause HWC – the major ones are the large carnivores -lion, leopard, hyaena, wild dog and the elephant.

AfriCat was initially primarily involved in trying to mitigate and alleviate the HWC problem on commercial farmland where so many of the free-ranging cheetahs live. This work will continue unabated, but to complement the national effort, AfriCat has already begun to assist the communal farmers.

Responsible Tourism can play an important role in Conservation. Ethical wildlife tourism in parts of Africa generates vital cash that goes towards projects like anti-poaching, environmental education and carnivore conservation. Tourism has also given governments a powerful economic incentive to preserve their country’s endemic wildlife. 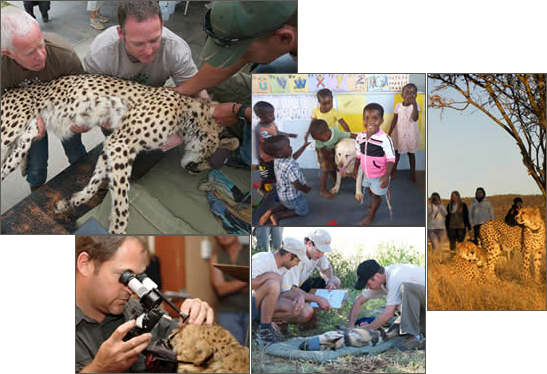 It is however important that wildlife is seen as a valuable resource at grass roots level – Responsible tourism has increasingly been able to help local communities realize the economic potential of wildlife they live with, side by side. By giving local communities an equitable stake in tourism – iconic animals like the mountain gorilla, the lion, cheetah, leopard, rhino, desert elephant and wild dog may have a future.

Tourism and Wildlife conservation is one of the most compatible relationships in Africa. Okonjima’s lodges and The AfriCat Foundation have embraced tourism as both a conservation strategy and sustainable business model.

This close relationship has resulted in the creation of a 200km² (50 000 acre) nature reserve, in the middle of 7000 commercial farms, providing a refuge for some of Namibia’s most vulnerable carnivores as well as a platform for environmental education and funding for relevant conservation activities.

Sustainable Development and Tourism in Namibia

Graham Watkins, the director of the Charles Darwin foundation, which coordinates conservation research in the Galapagos Islands, is on record as saying, “Conservation of the Galapagos can only work if the biodiversity in the archipelago is owned in the hearts and minds of those that live there. If the local community does not benefit, it’s not going to support conservation.”

Nelson Mandela, is on record as saying, “Ultimately conservation is about people. If you don’t have sustainable development around your wildlife parks – then the people will have no interest in them and the parks will not survive.” 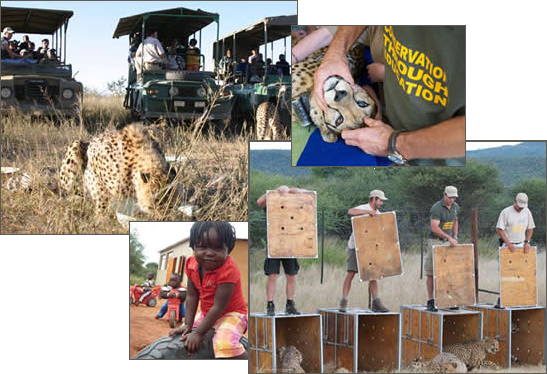 Here in Namibia with a landmass of 824,300 km², and a population of a mere 2,3million, one might think that there is room for all and the concept of sustainability is not a problem. If only it was so and man could continue to behave on a whim, indulge in extravagance and flaunt his superior mind to the four winds, but alas the reality is that Namibia is a harsh, dry nation where land dies of dehydration just as its inhabitants will if they do not take care to practice the art of sustainability and the science of conservation!

Overstocking of cattle and small stock on Namibian farms has resulted in bush encroachment which is reported to reduce potential grazing lands by as much as 4% a year. As grazing is reduced, so is a farmer’s income potential. Solution: stock higher to keep the cash coming in. Result: environmental suicide. But there is good news, for the Namibian is a creative and resourceful creature, just as the ‘beast’ which roam on the Namibian veldt learn to change and adapt, so too is land-use evolving into a more varied economically sound and hopefully sustainable way which heralds a chance of success for the future. Thankfully tourism has now become the fastest growing business in Namibia.

Chris Packham: “I have the great fortune to visit many conservation projects around the world and AfriCat is in the premiership. Its whole ethos is founded upon securing practical solutions to problems in the field. It’s about really making a difference, not talking about it. It’s about intelligent and effective solutions being implemented now, not tomorrow. And its new initiatives are more exciting than ever, releasing rehabilitated animals into huge protected reserves where they are carefully studied and monitored.

“The standard of care is exemplary and our understanding of these creatures’ ecologies and behaviours is constantly being advanced here. A few more AfriCats and this continent’s unique fauna would be a lot better off. Please do whatever you can to support its work.”

Images copyright:  the top main image on this page, inset images and logos are the copyright of AfriCat and used with their permission.