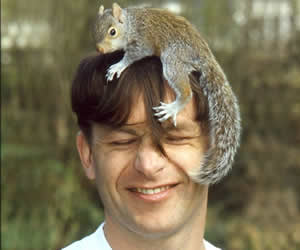 It was solely a passion for wildlife that led Chris to a life on the small screen. From an early age he had been bent on hiding himself in an ivory tower at the behest of some remote academic institution to study peculiar nuances of bird behaviour. After graduating, when he realised that funding for such fantasies was hard to come by and as he had developed a passion for Aston Martin motorcars, it was clear that another life plan was needed.

Chris met Stephen Bollwell, a wildlife filmmaker, who took him under his wing and trained him as a cameraman. Thus on a July morning in 1984 Chris started building sets, cleaning cameras and feeding the ever-changing menagerie that Steve was filming for the BBC.

They developed a great friendship and worked together in an animated harmony for many years and Chris will always be exceptionally grateful for the opportunity that Steve gave him.

In at the Deep End

When he began making films himself work was very much on and off, as you would expect for an inexperienced operator, but that Aston Martin had become a burning ambition so Chris fought ferociously for an audition for an up and coming children’s BBC programme called ‘The Really Wild Show’. He got the part and in the winter of 1985 caught a train to Birmingham, where with no experience and no tuition he turned up on set to present an item about seahorses which he had researched and written himself. It was in at the deep end for sure but he swam and presented what went on to become a BAFTA winning series for seven or eight years. It was a dream come true because the little boy from Midanbury in Southampton got to meet first hand, creatures that he had only seen in textbooks, he got to travel the world and visit some extraordinary locations where leading experts were keen to tutor him on all they had learned and, by the winter of 1986, there was a rather tatty Aston Martin parked in a lock-up garage whilst Chris made his every day journeys in a very rusty Renault five!

Always keen to learn, Chris pursued all sorts of television presenting work. He fronted several live series including Flamingo-watch which was broadcast all over America, wrote and presented his own series about wildlife photography for Channel 4, had a lot of fun with live ITV series called ‘Go Wild’, presented umpteen series of ‘Birdwatch’ for Meridian Television and made numerous appearances on everything from ‘Saturday Superstore’ to ‘Call my Bluff’.

He met a few of the nicest and most helpful people along the way and will never forget an early encounter with, of all people, the Bee Gees. Not Chris’s musical cup of tea, the group and their wives could not have been more kind one evening in a lonely green room before an interview. Of course, there have been plenty of prats as well but Chris has always remembered that his opportunity was founded on his passion for wildlife and not insecurity or ego. He’s been racing driving, free fall parachuting, wing walking, climbed the tallest tree in Britain and crawled down the deepest cave. He has wrestled with lions, been raped by a tapir and swum with great white sharks. He still thinks that when it comes to his job he’s one of the luckiest blokes on earth.

It was whilst working on ‘Birdwatch’ that he met a dynamic group of young people with whom he started a television production company – Head over Heels. In a very short space of time they made a huge number of wildlife programmes for ITV, National Geographic, the Discovery Channel and the BBC. They soon gained a reputation for putting small budgets on screen and making a little go to the ends of the earth. Perhaps the highlight was a series entitled ‘Postcards from the Wild’ which Chris presented with Michaela Strachan. It taxed the skills and emotions of the entire team. In the space of just eight months they travelled to 32 different countries and made some exceptional wildlife films.

There were lows but there were extraordinary highs too. Nevertheless, as the most experienced member of the team Chris found himself in an increasing number of meetings, trying to source funding for future series and fretting about mischievous employees, all things that he very definitely didn’t want to do. So after three years of frantic fun the company dispersed and Chris began working on BBC South’s ‘Inside Out’. He brought some wildlife into the mix but was able to explore his interest in heritage, history, his local culture and he even got to meet a few of his real-life heroes. “One sunny day I had the privilege to be flown by Neville Duke, the famous aviator, and the climax, perhaps even selfishly the climax of my career to date, was when I flew over my home town of Southampton in a Spitfire. It was a childhood, indeed lifelong, dream come true.”

Chris presented ‘Hands on Nature’ and ‘Nature’s Calendar’ on BBC2. These often repeated and popular series have given him the opportunity to eulogise and enthuse about British wildlife. Largely unscripted Chris had a free rein to infuse his passion with his perverse humour and palpable curiosity and once again he was fortunate to have enjoyed some great days out across the British’s Isles getting down and dirty with everything from otters to purple emperors.

Today Chris is a highly respected naturalist and presenter of many television programmes including BBC Two’s popular ‘Springwatch’,’Autumnwatch’ and ‘Winterwatch’ which he co-presents with Michaela Strachan, Iolo Williams and Gillian Burke. He’s a frequent guest on television panel games and chat shows.