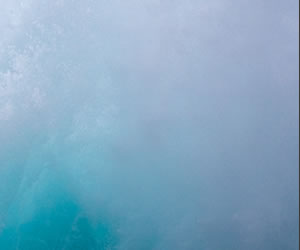 On Alun Hubbard’s weather-beaten boat the Gambo, gin and tonics are not sipped and there are no prawn sandwiches allowed.

It’s a purposeful platform from which Alun plies his particular brand of science.

He is every part the modern glaciologist but his custom-made equipment is much more dads-garage than hi-tech lab.

Every surface is cluttered. The kit seems to be in a constant state of development.

Marque I, version B, some are clearly prototypes and I imagine there are a few dark corners with projects that just didn’t fly.

I like all this of course, it’s so charmingly British, so Barnes-Wallis, so Caractacus Potts.

Just like all those madcap inventors, Alun’s stuff actually works. He’s getting results from toilet roll tubes and sticky-backed plastic.

Modern sonar equipment to scan the seabed is compact and relatively inexpensive and the Gambo has a typical kit. It produces accurate and clear images of the bottom.

But Alun is only partly interested in the bottom of the fjord. What he really wants to see is the glacier front, that part below the waterline, the nine-tenths of the future iceberg which is cloaked in icy brine.

Well, it’s simple isn’t it? Simply get a couple of far more specialised and costly sonar scanners and angle them sideways instead of down.

True to form the two devices are clamped onto what appears to be an old bed frame which is lowered into the water on a length of rope as old as the ancient mariner.

To get good enough data to build a three-dimensional map of the submerged ice, the scanners need to be within around 350 metres of their target.

That means that the trusty Gambo has to be this close to the precarious, unstable and deadly wall where icebergs are born.

This is the real death zone, where maelstroms churn in anticipation of millions of tonnes of merciless ice cracking free of its mother lode and smashing all before it. Not ideal in a fragile craft whose top speed is eight knots.

Our approach through clear water is cautious. A few tower blocks of ice cascade into the milky blue sea to be studied carefully but deemed to be of cursory consequence.

We turn bow to receive the swell from these calving incidents and the boat rocks gently.

It’s a sunny, still and calm night. The great gnarled face of the glacier looks peaceful and fulmars scud across the tangled mess of tumbled lumps, their groans echoing around the vast embayments as we slowly measure our passes, sometimes to within 250 metres of the edge.

In two hours we travel the six kilometres across the front and then turn and sail back to complete a second pass.

The sea fizzes with melting ice, tiny bubbles of air froth out after centuries of frozen imprisonment.

There is an undeniable tranquillity, a timeless sense of a grand presence, like an hour lost in a cathedral gazing at the vaulted ceiling in hollow silence.

A fisherman swings by, his wake cutting ribbons of twinkling blue in the glassy skin. He slows and motions with his hand to the glacier and then the open sea.

He shakes his head and turns his fast craft away. He thinks we are mad.

But the data is good, we have a happy computer and a happy crew and as we sail back into the night sun a whiff of peaty malt stings the air.

Below deck a hotchpotch of glasses clink as the magnitude of minor calving events precipitates mirth born of relief.

In the distance I hear the glacier groaning.