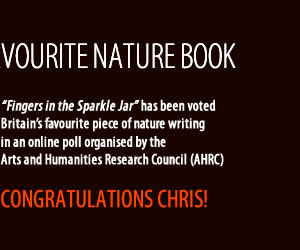 Chris’s memoir Fingers in the Sparkle Jar has been voted Britain’s favourite piece of nature writing in an online poll organised by the Arts and Humanities Research Council (AHRC).

“Thank you. What an extraordinary surprise. I am very flattered because up until this point almost all the discussion ‘Sparkle Jar’ has generated has been about my Aspergers . . . and that was easy to write about! What I slaved over were the sections of nature writing. I tried to wring out all the wonder I felt in prose in an original and poetic style. Indeed, the few sections I actually like are those where a few words have made an everyday encounter magical – as they always were through my prying young eyes. I am equally surprised, as the format of the book is unconventional, confrontational and challenging – everything I needed it to be, but perhaps didn’t expect the readers to enjoy so readily. It’s not a novel, but it needed to be novel.
PS: I voted for Wind in the Willows”

In total, 7,300 votes were cast in a national online poll featuring 10 shortlisted books. In second place was the classic Tarka the Otter by Henry Williamson and in third was Common Ground by Rob Cowen. Also on the final shortlist (in alphabetical order) were:

These were selected by a panel of experts from more than 270 titles nominated by the public last year. The panel members were: Mike Collins, Arts and Humanities Research Council; Miriam Darlington, nature writer and lecturer at the University of Plymouth; Naomi Fuller from Avon Wildlife Trust; Ben Hoare, Features Editor at BBC Wildlife Magazine; Professor Graham Huggan, University of Leeds.

The campaign to find the UK’s favourite book about the natural world was used to help launch Land Lines, a two-year research project, funded by the AHRC. Led by the Universities of Leeds, St Andrews and Sussex, the project will take a deep look at the history of modern nature writing from 1789, when Gilbert White’s The Natural History of Selborne was first published, to the present day.

Dr Pippa Marland, Research Fellow on the Land Lines project, University of Leeds said: “The Land Lines team would like to congratulate Chris Packham wholeheartedly on his well-deserved win. Fingers in the Sparkle Jar is an outstanding book: raw and brave, and written with an astonishing vividness of perception and recall.

“With this memoir Chris has succeeded in attracting readers who would perhaps not usually pick up a ‘nature book’. Informative and heart-breaking in equal measure, and graced with a punk sensibility and wry sense of humour, Fingers in the Sparkle Jar is a work of great originality which pushes at the boundaries of the nature writing genre’.”

Public comments about Fingers in the Sparkle Jar

“It’s the most powerful, honest account I’ve ever read about how nature can shape a person and how interactions with wildlife can stay with someone for ever. It’s beautifully written and the messages and story stayed with me long after I turned the last page.”

“Fingers in the Sparkle Jar is a truly beautiful, honest account of growing up with Asperger’s and in love with nature, when everyone around you wasn’t. It’s brutal and hard to read at times but ultimately brilliant. And very well written! I couldn’t put it down.”

Gary Grubb, Associate Director of Programmes at the Arts and Humanities Research Council said: “The AHRC funds a wide range of research that contributes to our cultural understanding of the natural world and of our environmental values, experiences and behaviours, as well as the ways that nature inspires and contributes to human creativity and cultures.

“Research on the ways the environment is represented through art media and literature, including the Land Lines project, is helping us to better understand the cultural value of the natural environment, the role that it plays in societal wellbeing and how communities are engaging with narratives about environmental change.” 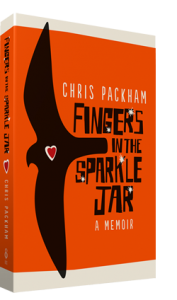 Fingers in the Sparkle Jar: A Memoir »