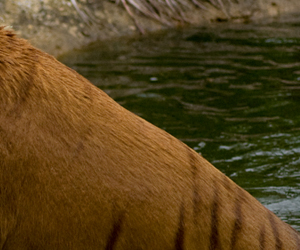 Time goes very quickly when you work in a zoo, it only seems days ago I was penning the last blog and here we are again! Anyone with pets will know how demanding non-human companions can be and our animals are no exception. They are the centre of our universe and keeping them happy and healthy is a matter of ensuring that we approach their well-being in a holistic way. What’s right for one individual may not be right for another so, as with domestic pets, it’s all about investing time and effort in understanding the individual.

Last week I mentioned the rescued raccoon who we were getting to know and hoping would live with us long-term. Despite lots of gentle attention and encouragement she has been quite defiant in her reluctance to let her guard down. The animal team have been lobbying hard to keep her but another home has been found by the rescue service who initially took her from the RSPCA. She will leave us soon to live with an experienced private individual who has an older female in also in need of companionship, I think this will be by far the best solution for our female who is no fan of human-beings right now but will no doubt calm down and feel more secure around her own kind. I’ve broken the news tentatively to the team who have really become very fond of this troubled raccoon in the short spell of time she has spent with us. 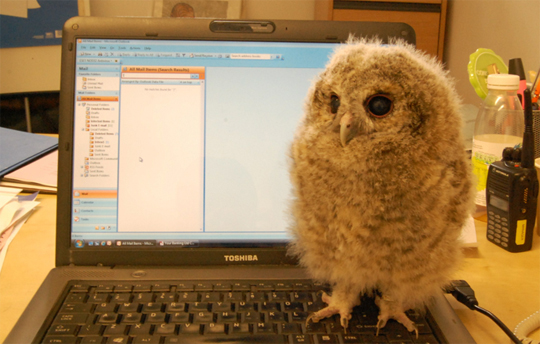 ‘Darwin’ the darling tawny owlet is fast stealing the show here at the zoo. I’ve seen grown men go all gaga in his company such is his appeal to even the most hardened person’s softer side! He is developing at lightning speed, at 6 weeks old he is at the age where, in the wild, he would have left the nest and would be hanging around on branches learning how to use his wings. He wouldn’t, of course, fledge fully until around 3 months old but it would be during this period when he would be taking short flying lessons to try out his avian equipment. As Darwin will be a recruit of the Education department it is imperative that we socialize him in all aspects of human life. To that end, he has been keeping us company in the offices during the daytime and heading home with us, taking it in turns (actually squabbling over who has him), in the evenings. I have had that pleasure over the last few days, last night it took me 1 ½ hours to consume a modest salad due to the constant activity of a small fluffy aircraft flying over, and occasionally ‘onto’ head! He is quite at home in my flat and loves perching high up on the window frames to watch the world go by. We’re feeding him mice and chicks, usually a couple of each a day, which are fuelling his growth at a rapid weight, he’s currently 332g. On Friday, our dear friend, Ashley Smith, and his wife, Tracey, from the Hawk Conservancy, paid us a visit to see how Darwin was getting on and advise us about his on-going care. Anyone wanting to ‘adopt a Darwin’ will soon be able to as he’s just had his photo-shoot with our photographer, Karen ready for his entry into the scheme which really helps us top up our animal care funds.

The big cat carers are still trying to ensure that Zena, the white tiger, continues to put on weight. Once we are happy that she’s increasing to the optimum weight we’ll try adding some other meats into her diet as she’s currently still on pure chicken mince, approx 5kg a day. Mary and I weighed her recently and she was 108.2kg, we’d like her to gain another 10kg. It’s equally important, as big cats age in zoos, that they don’t pile on the weight as this puts extra pressure on their joints and makes arthritis more of a threat to their well-being. Wild tigers can go weeks in between successfully capturing prey so over-feeding is to be avoided in human care environments. 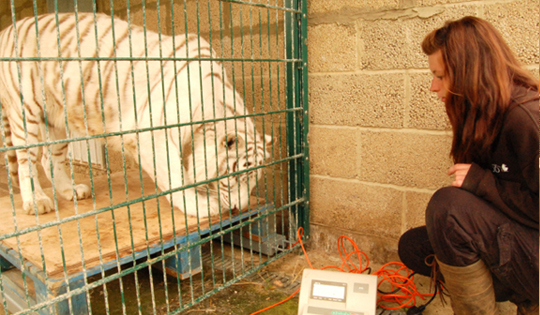 This week I finally caught up with one of our interns, Fran and our ferret ‘Hannibal’ (note to self, ban keepers from naming animals) out for a stroll in the zoo grounds. I had heard rumours that Fran had been working hard to get Hannibal, who came to us as an unwanted pet, used to his harness and clearly this has paid off as he was romping around in the gardens – hopefully Mick the gardener didn’t clock the little rascal rooting around in his roses… Ferrets are social animals, unlike their polecat ancestors who are solitary living, so we are on the look-out for a female ferret to join Hannibal. As ferrets belong to the family Mustelidae they have, like skunks, a flavourful aroma! I think Hannibal actually has a very sweet honey-like scent; ferrets have special glands near their anus which they use for scent-marking and defense. It is said they can recognize individual ferret friends or foes.

Our troop of black spider monkeys have been having a whale of a time in their new enclosure extension after the maintenance dept removed the dividing mesh to allow them access. The animal team still have a lot of work to do kitting out the large space with apparatus which they can use for their brachiating mode of travelling but it was a joy for us all to watch them exploring their new environment. Little Millie, the youngster, was particularly thrilled and at one point launched from height into an elderberry bush; I don’t know who was more surprised, Millie or the bush! In their native homeland of Central and South America, these agile primates spend nearly all their time living upstairs in the high canopy where they forage for fruits and nuts. They are important distributors of seeds which will be excreted out whole and fertilized by their feces. Due to their dependency on mature forest habitat, these monkeys are threatened by logging activities and they are susceptible to diseases such as malaria. 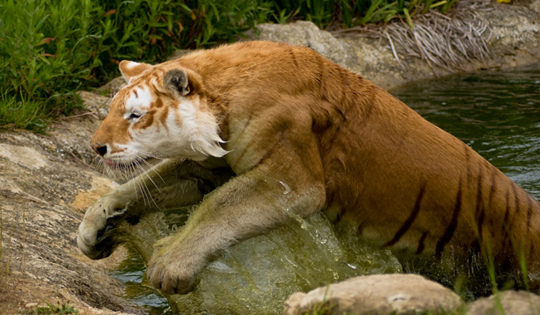 There has been some exciting reptilian activity in our Ranthambore tiger enclosure this week when a photography workshop group spotted our Indian tigers, Diamond and Aysha chasing a grass snake through the bamboo thicket. The snake made a bid for freedom by taking the plunge into the pond in the centre of the enclosure and, I am told, it promptly swam off to safety! That’ll be something for it to tell the kids about! Some of our animals, the lemurs for example, seem to have an innate fear of snakes but last year we had an incident with another one of our tigers, Lola, who came across a grass snake which had seized a toad – luckily for the toad it was inadvertently rescued by the tiger when the snake realized it was not the top of the food chain after all and made a quick get-away leaving the toad to do the same! We didn’t manage to get images of Diamond and Aysha with the snake but Karen did capture some magical moments, one of which shows Diamond, the tabby coloured tiger, in an amazing action shot. 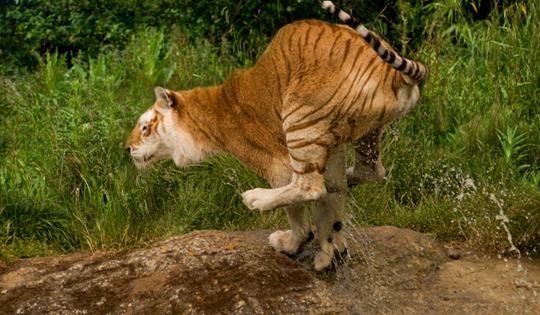 And, finally, speaking of Diamond’s, this blog wouldn’t be complete without a celebration of the Diamond Jubilee! Here’s a picture of Zena’s sister, Zia in a crowning moment during one of our big cat feeding demonstrations. Our volunteers gave her a cardboard crown decorated with animal-friendly paints and stuffed with succulent meat as enrichment– all fit for a little princess! 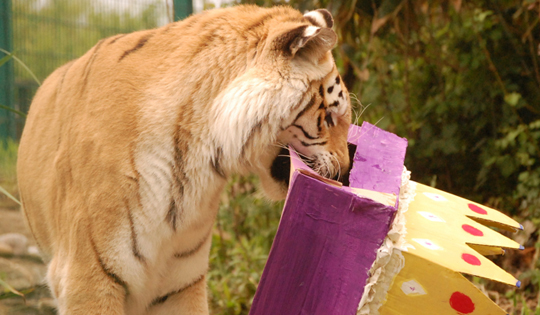